Two years ago, I painted a test model of a Bucellari of Belisarius, an elite cavalry knight of VI c. AD, suitable as a clibanarii/clibanarius too.  And two weeks ago, I decided to finish the unit!

These miniatures represent the elite of the early Byzantine armies, Bucellarii, armoured cavalrymen, trained to fight with composite bow, small shield and long Kontos lance, like the Clibanarii.
General Belisarius had a personal guard, and almost personal army of Bucellarii, which in the mid-6th century,  numbered 7,000 at its peak.

The bucellarii of Belisarius fought battles against Sassanid Persian like Dara and Callinicum, and against Vandals, Ostrogoth, Franks and Visigoth in the West,  or Slavs in the Balkans.

Meanwhile Aventine Miniatures is designing and sculpting its own version of these troops, I decided to use the very nice sculpts of Wargames Foundry Miniatures,  Late Roman and Arthurian ranges, I got my inspiration from Wargames Foundry painting guide book (the second book they did) where there is an article about converting Late Roman Clibanarii into Belisarian Byzantine Bucellarii, by master Kevin Dallimore. So with my (very) limited scupting skills and miniatures available, I made a unit of Bucellarii, following Mr Dallimore's examples and instructions.

I am very pleased with the result and colour selection, Foundry's Arthur is now my own version of Belisarius.  The banner is just a photo of the banner depicted in the mentioned book, printed and painted in some parts, as I am terrible at freehand painting...

Most horses are Foundry half barded or armoured horses, while a couple of them are Old Glory's, while the lances are metal with a plastic Warhammer pennant glued on it.

They are based for Impetus/Hail Caesar. 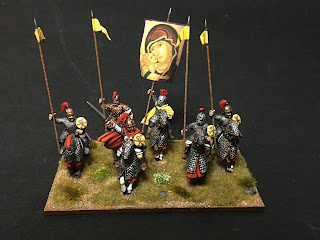 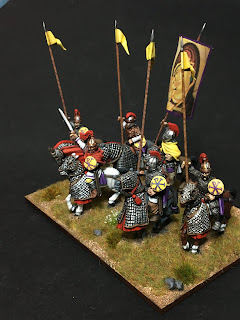 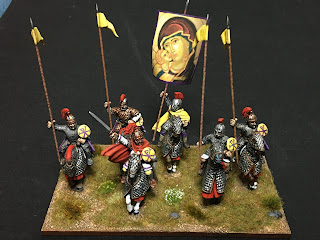 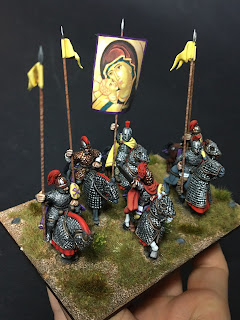 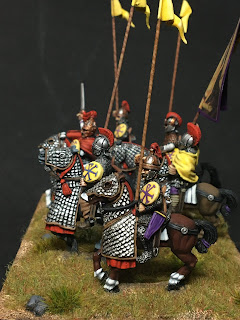 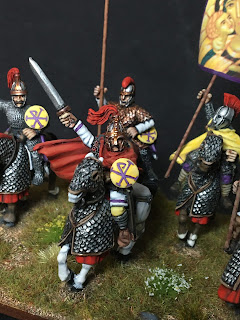 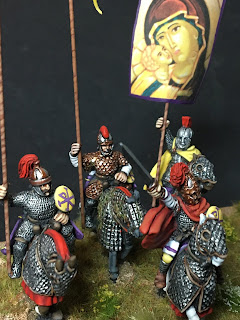 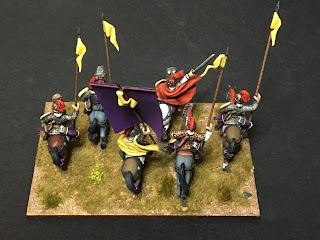 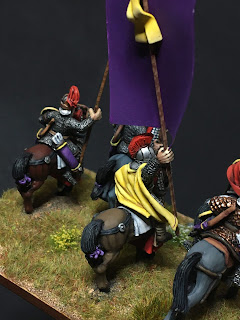 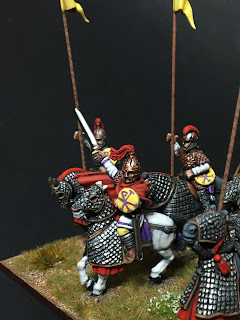 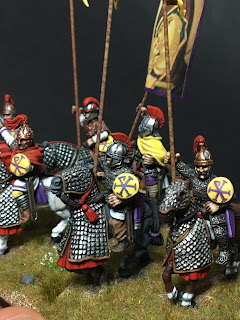 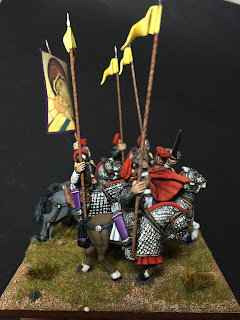