This is my first post of 2022. This time I bring you a fantasy miniature, the Imperial Herald with Battle Standard. This figure was released in 1992 for Warhammer Empire army, sculpted by Alan Perry.

I was lucky enough to buy the box of "Heroes of the Empire" 3 years ago, at a good price, but I had painted none of the miniatures until now.

In Christmas I am usually in a "Warhammer" mood, perhaps because, when I was a child, these kind of miniatures were a common Christmas present at home :)  So I grabbed this mounted Herald and started painting him!

I used an airbrush in order to speed up the process of painting the barding of the horse. I also used waterslide decals by Greenstuff World, I highly recommend them, great quality and you get a lot of decals per sheet.  I chose the more " Empire" like designs and applied to the barding of the horse, and also to the rider when it was painted. Of course I first applied a coat of gloss varnish prior to putting the decals into place.

This kind of miniature is a joy to paint: lots of character (It's a Perry!) and a huge amount of details everywhere, so also was time consuming to get it finished.

By the way, the flag was imposible to me to find it on the internet or books/magazines, so I just took a picture with my phone of the miniature in the Army Book of the Empire, and then print it in the appropriate size and Voilà! I had the (literally) original flag on my own version of the Herald with Battle Standard. 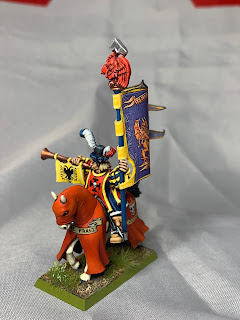 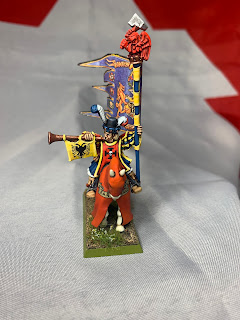 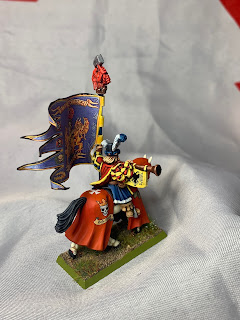 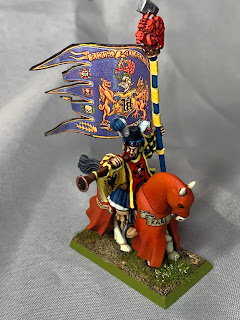 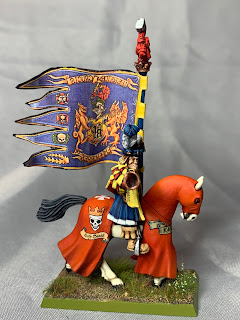 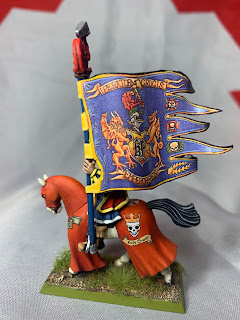