Today I bring you a short post, all of us who paint and play with miniatures from the horse and musket era, or renaissance, need gabions, indeed we will need a lot of gabions!  As I don't like the plastic gabions too much (Renedrea produces them), I have some spare metal gabions from several manufacturers, but the metal ones are a bit pricey in my humble opinion so I had an idea, albeit maybe a controversial one...

I decided to ask a friend for help, a good friend of mine is dentist (and an enthusiast wargamer), and in his own clinic, he has a VERY  expensive dental scanner and several high quality resin 3d printers, so I asked him  If he could scan a gabion for me and then modify the digital archive of the gabion so that we can expand or reduce the size...  and now I have an almost unlimited supply of customized gabions for almost no price (well, just a few cents).

I also want to say that I am absolutely against fraudulent use of intellectual property, and historical miniature brands are usually small companies that invest large amounts of money in sculptors and material to produce their miniatures, so although the current technology allows us to reproduce miniatures in resin at almost the same quality as the originals, I will always prefer original miniatures in my collection, and in sacred metal!  That said, in some cases I think it is legitimate to use 3d printers and scanners, specifically to make spare copies of your OWN conversions in metal/plastic/green putty,  for your personal use only, or also small elements of scenery such as these gabions.

Beyond this boring legal disclaimer, I wanted to share with you my new gabions for small dioramas and pieces of scenery.

What do you think? 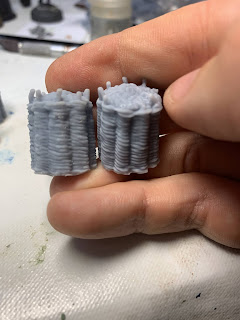 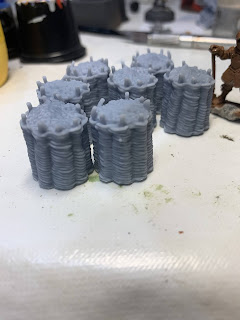 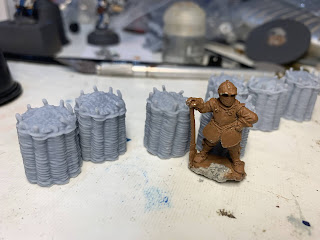