Again a brief update of this blog, this time a Spanish officer and a "rodelero"/roundshier/targeteer guard, who were already out of fashion, but at the end of the seventeenth century, they still existed accompanying the officers and maestres de campo (Tercio's colonels) as escorts, especially in ceremonial tasks . 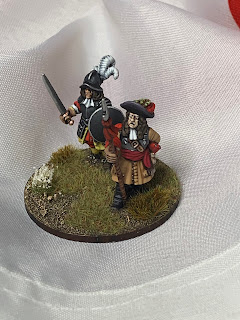 The miniature depicting the guard is a Swiss pikeman from North Star 1672, converted with a buckler, and replacing his open hand with a hand holding a sword. Also, in his helmet I have added a feather to make it look like a painting that really inspired me "Auto de Fe en la Plaza Mayor de Madrid 1680" by Francisco Rizi.  By the way, the feather is from Tercio Miniatures. 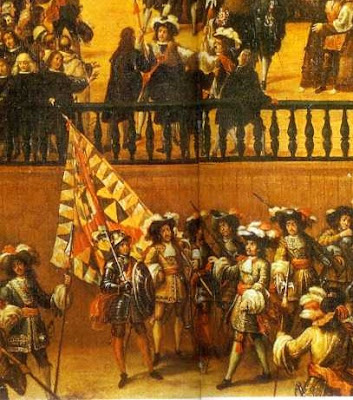 Talking about the officer, is from Front Rank miniatures, it comes with the blister of Monmouth Rebels officers. it was painted with one of my favourite painting triads from Foundry Paints, Buff Leather. and also 2 different red tones, one for the sash, and another more scarlet tone for the cuffs and feather. The partizan is Bicorne Miniatures's ECW range.  The officer is intended to be one of the Dramatis Personae of my campaign "Gerona 1684" he is the military governor of the city besieged by the French, a nobleman of Flemish origin, D. Carlos de Sucre... one of the men who led the valiant defense of Gerona. 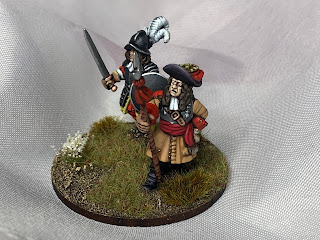 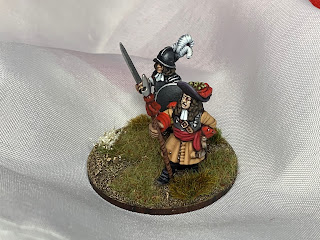 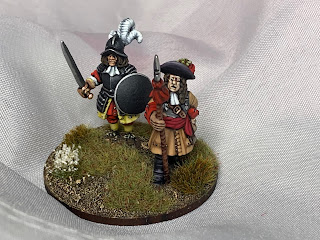 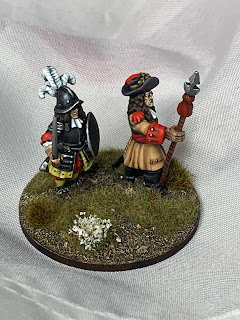 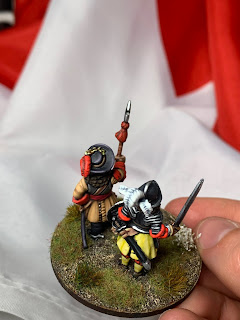 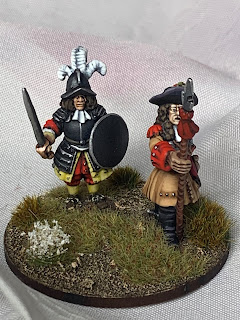 So, as I said above, continuing with my project of Gerona 1684, this command base represents the Governor of Gerona, D. Carlos de Sucre, and he will inspire the inhabitants and defenders of the city on the battlefield.

I will have to make some special rules, for him, for example, any miniature that is less than 20 cm from D. Carlos, will be able to re roll one failed moral save ;)  and also he is more difficult to kill in game because any attack aimed at him, will hit always his guard first (poor guy) !

D. Carlos, is documented in Catalonia from 1678, he was governor of Gerona from 1684 to 1694 and general field master of the Army of Catalonia, died in Madrid on July 10, 1704 and was buried in San Andrés de los Flamencos, having named heir to his properties in Flanders to Carlos Adrián, Marquis de Preux). He continued to be stationed in La Seo de Urgell, Catalonia in 1695 and 1696. In 1697 the French besieged Barcelona and he was one of the generals who defended the city.